This historic animal mutilation report was filed by a witness visiting West Yellowstone, Montana in April 2002. The witness found a mutilated head of a deer or elk while hiking in pristine white snow. No blood was found near the head and it appeared to have precise cuts in several areas that were unlike predator wounds. The hiker was so scared, he took off and left for home quickly before saying goodbye to friends.

From the MUFON database: 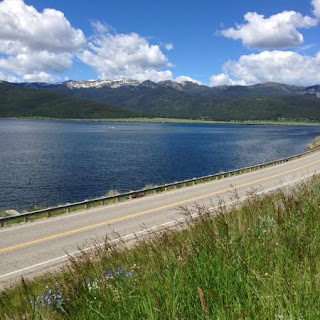 Mt. Hebgen near this area. I had spent a few days in April 2002 volunteering for an animals rights group and we were out in the field all day long - snow still on the ground; sunny days but cold nights. The cabin where we stayed was on the North side of Hebgen Lake Road. During one of my volunteer days, I saw a dead deer along the Madison River - clearly it had perished from the winter cold and had some predator marks on it. Large wolf prints were abundant in the area; howls at night. Elk and deer were spotted and lots of Buffalo. On the morning that I was to leave, I had a horrible urge to hike up into the mountains to the North of the cabin. I just HAD to hike. I got started early in the morning around 7 a.m. as the rest of the volunteers went out toward the Hebgen Lake area for another day of volunteering.

The organization provides boots and snow shoes as well as other winter gear for volunteers in an outside shed. I put on boots but chose not to use snowshoes because I did not think I would be out long and the snow was frozen from the night before enabling one to walk on top of it. It had lightly snowed the previous night and there was about 2 to 3 inches of powder snow over the old, hard snow. I marveled at the beauty of the snow on the evergreen trees. My boots crunched against the frozen snow but I was able to easily walk on it though it was a bit slow because of the incline and also because I had to maneuver a bit through the trees. After a while there was almost a path in which I could easily pass between the trees. I was heading North and to my left I could see some rocky outcroppings and as the sun came out, it hit these and made a beautiful site. Birds were chirping.

For some reason, the fact that there was the light, fresh snow all around me was very much in my mind. I have no idea how long it was before I came around a corner and before me was a clearing of sorts which looked like one could then go toward the left or proceed a bit to the right. But in the middle of this clearing I saw a dark object and as I proceeded closer I realized it was the head of a large deer or small elk. I immediately became spooked because the snow all around it was untouched. The powder-type show was pristine in that clearing and there was the head lying there somewhat facing me as if someone had carefully placed it there. There was no neck. No blood on the snow or on the head anywhere. The clean, pure snow really did spook me - the observation that there was NO snow on the head added to my growing fright. I think it was around this point that I realized that there were no birds chirping. It was extremely silent and I could hear my breath and I was sweating (most likely due to the hike).

Though I was scared,I actually crept toward the head and stooped down at the right, front side to look closely. The ears were gone. Not torn out but as if sliced off and I recall that I could see a hole into the head where the right ear used to be. The left ear hole was not as visible from where I was. I noted that there was no indication that the animal had had horns. Either a young animal or a female (deer or elk I just don't know). The eyes were missing, too. Cleanly removed in circles so that there were two blank holes. The upper and lower lips were also gone so I could see the teeth. I tried to reason in my head that if a predator did it, it would be torn/jagged and not a smooth cut as this was. I do not know if the tongue was gone because the mouth was closed - just missing its lips. Again, there were no prints of any animals around and the snow was pristine all around this head - it was in a clearing with no trees overhead. Another observation that really spooked me was the fact that the skull had a perfect round hole in the top of it. I have to estimate that it was about the size of a half-dollar. It was cleanly cut - again, I thought to myself if a predator wanted to eat the brain, how in the world could it make a cleanly cut hole like that. I could not really see down into the head but it did appear that the brain was missing. The fur did not look decomposed - in fact, if it were not for these other oddities, the head and the fur looked to be in good condition. Fresh. Not old and decomposing or mis-shapen.

Again, I compare this with the site of the dead deer on the Madison River which had clearly been roughed up by predators. This was not. The silence was really getting to me. The fact that there were no prints or other disturbances around the head - the fact that it appeared to have been placed or dropped there from above - and the silence really scared me. I remember backing up and thinking over and over in my head "this can't be a mutilation could it?", "this can't be a mutilation could it?". It was not a cow or a horse. It was just a head - not an entire animal. But how could you explain such a sight AND to put the final nail in the coffin, everything around had a light dusting of snow on it EXCEPT for this head - no snow on it. It was on top of the freshly laid snow. It was as if someone was mocking me - I turned to head back to where I had come from. The sun was out now and unbelievably, my feet were now breaking through the snow and it would go up to my knees or thighs as I had to push my way through the snow. Slow going because of this.

By the time I got back to the cabin, it was around 11:30 a.m. and I was exhausted. I took off my boots and left them in the outside shed where all of the other supplies were kept. I did not go in to say goodbye to anyone. I just felt like I had to get out of there. I felt embarrassed that I had gone hiking alone without telling anyone (everyone knows you do not go hiking alone or not tell anyone where you are going) - and I also thought that it was stupid of me to not have used snowshoes. There was just something strange about how I felt and acted when I returned to the cabin. My bags were already in my car and I was just concerned about getting back to Ogden, Utah in a decent amount of time (where my mom lived). I felt it was important to share this on MUFON - I have been a MUFON FI in So. CA for a couple of years now, and have never had the time to submit this. I am hoping that this information will be helpful as more information is gathered on mutilations. I have had strange experiences my entire life, but on that particular morning, I - truthfully - would have more expected to run into a Sasquatch than a mutilated head which was the farthest thing from my mind that morning when I had that urge to take a hike."

This report is very similar to others, despite the lack of a body, the head had typical mutilation-type wounds and there was no blood anywhere. Seemingly, the head was dropped from above, which would explain the lack of prints in the snow.
Posted by Margie Kay at 3:08:00 PM No comments: