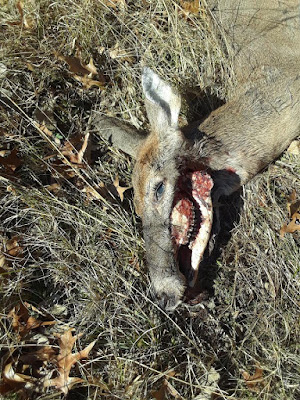 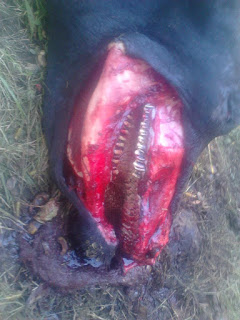 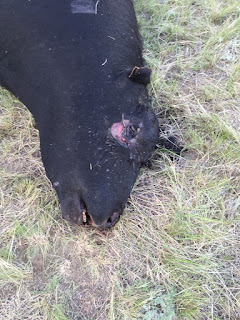 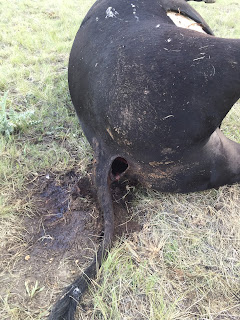 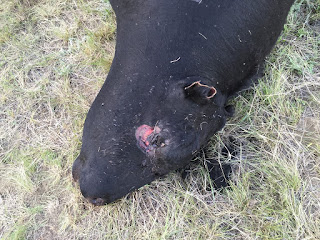 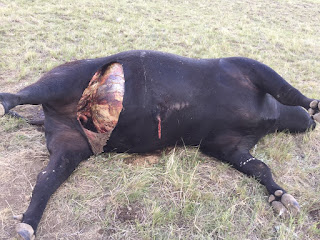 What giant bird is at Blue Springs Lake?

A new report just came in from three witnesses who saw a gigantic bird at Blue Springs Lake (also near Lake Jacomo) in Blue Springs, Missouri. A mother and two of her grown children were driving in the area and saw a huge bird fly overhead, over trees, then swoop up and over a hill. They said that the bird was a dark brown color and did not resemble and eagle or hawk, and that the wingspan was a minimum of 10' wide.

The three witnesses checked www.whatbird.com to see if they could find the bird that they saw and could find no match.

Another cow mutilation was discovered by a rancher near Trinidad, Colorado. Two 1100 pound female cows were found with unusual wounds, one was dead, the the other alive but with internal injuries. The rancher contacted Chuck Zukowski to investigate. Chuck's report is here:

According to the news website www.kake.com, a cow was found dead and mutilated on a ranch in McPherson County, Kansas on January 3. The rancher is baffled by the incident and has offered a reward to catch the perpetrator.

According the sheriff, a bull was found dead and mutilated in a nearby county two weeks prior.

Margie Kay is investigating the incident and will file an update as soon as possible.
Posted by Margie Kay at 7:52:00 AM 1 comment:

A rancher from Clinton, Missouri called today to report two animal mutilations that occurred in December of 2011. The rancher did file a report with the Sheriff and called the local news station.The reporter called but did not visit the site.

The rancher found the first cow on a Thursday morning in December of 2011 with her tail severed and lying on the ground next to the animal, and the anus seemingly cored out. There was no blood and there were no other injuries.

The next morning the rancher found the entire herd gathered around in a circle and was suspicious that another cow had been killed. He walked to the area and found a second cow lying dead on the ground, but with more severe injuries and missing udder, part of the jaw cut out, one eye cut out and the tongue missing. There was no blood on the animal or on the ground.

The rancher found no tracks on the property from vehicles, and the locked gates were undisturbed. Both animals were moved to another location at the back of the property to decompose. Notably, the other cows have not gone near the decomposing bodies of the animals or the locations where they bodies were found. Additionally, no scavenger birds or animals ate on the carcasses, which the rancher says is very odd.
_________________________________